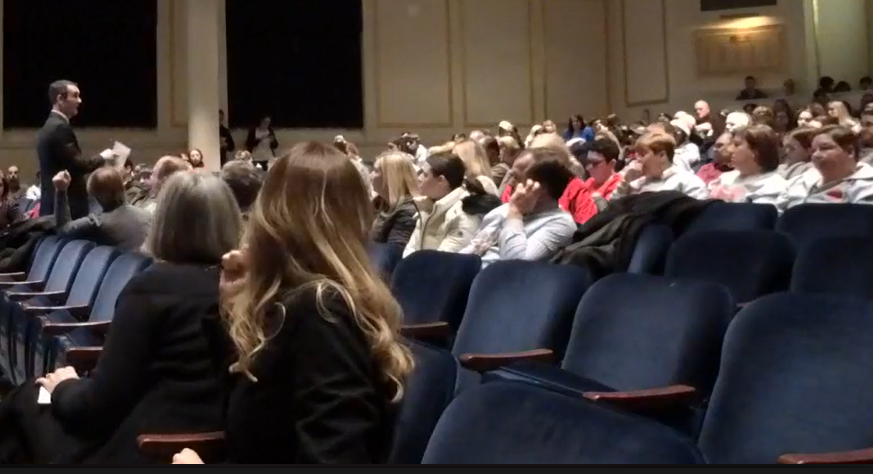 “We have been auditing  districts now my entire tenure,” DePasquale told the crowd of parents, students, teachers, and residents.  “We have done about 2,000 audits of public schools since I have been Auditor General.  I don’t mean this as condemning or condoning.  This is one of the five or six most challenged school districts I have ever seen.”

The forum was attended by School Directors Paul Duffy, Kate Gilmartin, Mark McAndrew, and Tom Schuster.  Dr. Alexis Kirijan, the district superintendent, did not attend.  Former director Paige Gebhardt Cognetti, who resigned in December to take a job working for DePasquale, was seated in the front of the audience.

“If we are going to rebuild the trust in the school district,” said one resident who identified herself as Rohun.  “We have as a community have to be able to have faith.  The only way we can have faith is a clean slate moving forward.  We have too much at stake here to look at the past and people who are locked in the past and the old ways of doing things.”

The conversation also turned to the recent appointment of Gopal Patel to take Cognetti’s vacant seat.  Selected in December by the School Board with no hearings, interviews, or inclusion in the agenda, a minority of the school directors have called Patel’s appointment illegal.

DePasquale agreed.  “I don’t have the legal authority to audit municipalities. I have to be invited in,” he said.  “I was asked to audit the Scranton Sewer Authority sale.  The deciding vote not to allow me to do it was the person they appointed.”

Gopal Patel resigned his seat on the Scranton Sewer Authority shortly after being named to the vacant seat.

There was one point of agreement between the Auditor General and all of the members of the embattled school board.  “The public education formula in Pennsylvania is broken and poorer urban districts need more money,” said DePasquale.